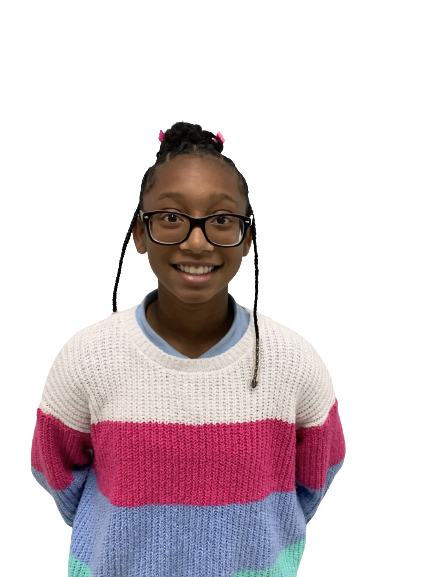 Whether it’s the creativity cultivated by playing Roblox, an online platform which allows users to invent video games and play those created by others, or the many opportunities she’s presented at Meadowfield Elementary School, fifth-grader Jayla Stokes has developed myriad interests.

At home, she is learning to cook and has become a whiz at video gaming. At school, Jayla is actively involved in volleyball, softball, archery, hospitality (greeter and food deliverer) and news broadcasting.

“Jayla Stokes contributes to the success of our Mustang Morning News Show by being an enthusiastic member of our news anchor team,” said Meadowfield Principal Lisa Davis. “She is a punctual and responsible student that takes pride in her work.”

Davis said Jayla is always finding ways to make the news more appealing to her classmates.

“Jayla demonstrates leadership by taking ownership of the show and helping the team to think outside of the box to make our programming more engaging,” she said. “She suggests fun and interesting segments and adds her own flare to each episode.”

Jayla has plans to take her knack for creating with her as she studies math at Harvard University and once she becomes a nail technician.

“I got the idea (about attending Harvard) from my uncle who went to Harvard, and he said I would (have) a lot of opportunities,” said Jayla.

Jayla’s older brother, Jayden Stokes, is a sixth-grader at Hand Middle School. She credits him with teaching her a few things, too.

“The best thing I learned from him was to study in school a lot more because it’s going to get harder,” she said. “Also, algebra – he taught me algebra.”

Included in the list of those with whom Jayla has forged an impactful relationship at Meadowfield are school resource officer Michael Doire and receptionist Tammy Kendrick.

“I’ve been here since pre-K, and I’ve gotten a lot of opportunities to do things around the school,” said Jayla. “It’s been really nice.”

Davis said she and her staff are proud of the growth that Jayla has demonstrated as a student during her time at Meadowfield.

“We are excited to see how she will continue to flourish in the future,” she added.