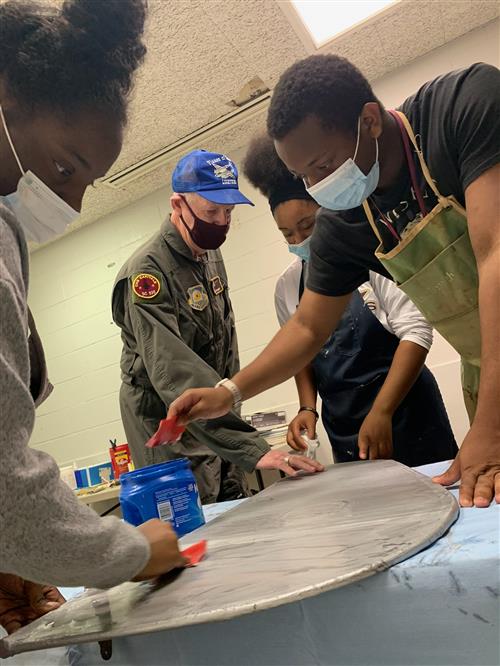 Before students can fly a plane on their own and earn wings, the Air Force JROTC cadets in the Ground School class at Columbia High School have to learn the basics.

This is the second year that Columbia High has offered the class, which started as a response to a worldwide pilot shortage and an appeal from Boeing to partner with the school to train pilots, said Major Ray Hammond, senior aerospace science instructor at Columbia High.

“We visited Boeing in Charleston three years ago, and they want students to come to their program,” said Hammond. “Boeing, after one semester alone, was cherry-picking all of these students. So, they wouldn’t even let them finish and were taking them within six months.”

Teaching the Ground School class is Jack Fastnaught, a certified flight instructor who worked as an air traffic controller for 35 years. On Mondays and Tuesdays, students learn the academics of aerodynamics and on Thursdays and Fridays, they are taught the tenets of AFJROTC. To add a level of excitement for the field of aviation and to give the students a practical application of what they learned about aerodynamics, the students work on repairing an aircraft rudder and engine on Wednesdays; by all accounts, the hands-on day is a big hit. There are also AFJROTC leadership and physical fitness components of the Ground School class that are taught by Hammond and Sgt. Jimmy Gaffney.

Cadet Kenneth Spann, a student who has earned his drone certification while in the class, said the Ground School has enhanced the AFJROTC experience for him.

“It’s something new; something no other school I know of has,” said Spann. “There are lots of opportunities. It is fun, and you get to fly.”

By “flying,” he means drones and model planes, while he gains the classroom knowledge he needs to soar. Hammond said the class is designed to help high school students who are interested in the field of aviation get an early start by earning their private pilot license (PPL) at no cost through the HQ (Headquarters) AFJROTC Flight Academy’s $25,000 scholarship. Students age 16 or older begin with a student pilot certificate which is merely a “license to learn.” With it, there is no ground instruction, flight training or testing involved; it can be obtained online. PPL candidates must pass a written test and a flight test to obtain the license/certification.

Fastnaught’s desire is for the Columbia High cadets to go on to qualify for the Flight Academy’s scholarship and gain their authorization to fly solo. He describes it as the ultimate for any pilot.

“That’s a big milestone in a pilot’s life. Talk to any Air Force pilot, any commercial airline pilot and ask them if they remember the day they soloed, and it’s like the day you were married, the day you were born,” said Fastnaught. “It’s in the log book and it’s something everybody remembers.”

The Flight Academy’s eight-week summer aviation training program is conducted at partnering universities across the nation and is open to cadets currently enrolled in high school AFJROTC programs and who have a minimum 3.0 GPA (on a 4.0 scale); are in good standing in their unit; take an Air Force aviation aptitude test; provide instructor and school endorsements; and have a strong interest in aviation.