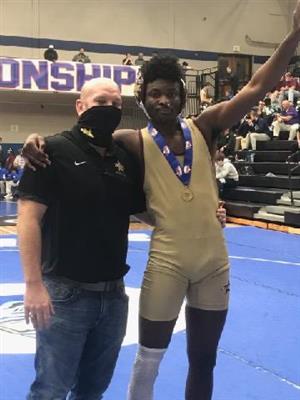 Columbia High School wrestlers competing in the Class 2A State Wrestling Championships March 6 took home the gold, as well as experiences that will prepare them for next season’s competitions.

At 182 pounds, Elijah Mervin capped off a great senior season by winning the state wrestling title in his weight class. Elijah described the final seconds of his state championship match this way: “Getting that final takedown was a huge relief because I knew I was going to achieve everything I worked hard for. Both wrestling and Coach Lovier taught me how to deal with adversity in any situation, and how to properly bounce back after coming off a loss. To be a champion isn’t about consistently winning, but how you persevere through adversity.”

Elijah’s teammate Fontroy “Troy” Randolph also won a medal at the competition. For the second consecutive year, he finished third in the state in his 106-pound weight class. Troy finished the season 14-4 and with a career record of 47-10. He hopes to do even better next year and claim his first state championship.

Just getting to the state tournament this year was an accomplishment for Mikale Hare who was plagued with injuries last year. The 195-pound junior persevered and finished fourth in the state championships in his weight class this year. His coach described him this way: “Hare is quietly one of the most reliable wrestlers in the Columbia line-up, frequently coming up big to secure team wins. The rising senior hopes to end his career with another run at a state title next year.”

The district extends its congratulations to these outstanding student-athletes, as well as to Columbia High wrestling Coach Joe Lovier and the other members of the wrestling team who competed in the state finals. For more information about Columbia High athletics, visit Columbiacaps.com.