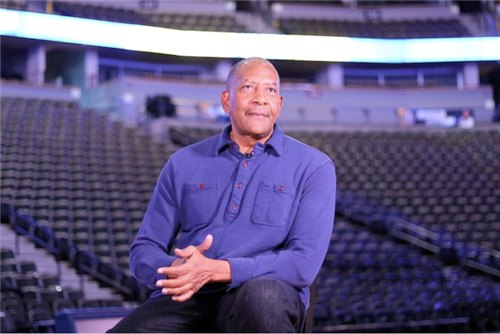 Columbia, South Carolina (January 13, 2020) – Dreher High School will retire Basketball Hall of Famer and NBA legend Alex English’s No. 22 Jersey on Friday, January 31 during the Dreher vs. Lower Richland boys game, which starts at 7:30 p.m. A special ceremony will take place at halftime (approximately 8-8:15 p.m.) at center court. English’s jersey retirement will be the first ever in Dreher basketball history.

There will be a pre-game meet and greet with Alex English in the school cafeteria starting at 6:30 p.m., so fans are encouraged to get there early and remember that Richland One has a clear bag policy.

"We are very excited to honor Dreher alum and basketball legend Alex English,” said Dreher athletics director Jeff DiBattisto. “His accomplishments in the game of basketball at all levels are world-class. He continues to be an ambassador for the game of basketball around the world and we are proud he is a Dreher Blue Devil. This honor has been a long time coming and we can't wait to celebrate on January 31."

Born and raised in Columbia, English attended Dreher High School from 1968-1972 where he was an All-Region and All-State star athlete, followed by the University of South Carolina where he reigned as the Gamecocks’ No. 2 all-time scorer.  English was drafted into the NBA in the second round to the Milwaukee Bucks and went on to play with the Indiana Pacers, but he spent the bulk of his career with the Denver Nuggets, where his career flourished. While in Denver, Alex English quietly assembled one of the most impressive records in NBA history. Known for his smooth shots and low-key demeanor, English became the most explosive member of a high-powered Denver Nuggets team that consistently ranked among the league's top-scoring clubs.

In his post-player career, English was named the first director of player programs for the National Basketball Players Association.  His duties included overseeing alcohol, drug abuse, HIV/AIDS education, player orientation and career planning programs. He went on to be an assistant coach of the Atlanta Hawks, Philadelphia 76ers, Toronto Raptors and Sacramento Kings. English is currently an ambassador for the NBA and teaches at their many NBA Academies in China, Europe and South America.

Off the court, English garnered attention for his successful philanthropic initiatives and business endeavors. Along with his wife, Vanessa, English successfully owned and operated Wendy's franchises in Columbia, South Carolina for 16 years and is the current owner and operator of a European Wax Center in the Columbia area. He is an active participant in the SportsUnited Sports Envoy program for the U.S. Department of State, contributing to SportsUnited’s mission to reach out to youth populations in order to promote growth and a stable democratic government.  English is also a participant in Basketball Without Borders, traveling the world as an ambassador of the game (North America, Africa, Asia, and Europe).

Dreher High School is a state and national award-winning high school in Richland County School District One in Columbia, South Carolina. Dreher boasts many achievements in academics, the arts and athletics, including being ranked by U.S. News & World Report as the seventh-best high school in South Carolina. For more information about Dreher, go to www.richlandone.org.